A TRIBUTE TO THE BISLEY ANTIQUE AND CLASSIC ARMS FAIR

THE HISTORY OF THE BISLEY ANTIQUE AND CLASSIC ARMS FAIR

Since 1995, the Bisley Arms Fair was a bi-annual event. As described by Christopher Pearce, it was proposed as an “un-typical” arms fair. It was launched to be different by harking back to the original concept of arms fairs, which was to bring together dealers, collectors and enthusiasts to an event concerned solely with the best of arms, old & new, without the ever increasing element of “militaria”

The venue was chosen to provide the best possible setting for such an event. No other show could have the unique advantage of taking place at the most famous and historical shooting grounds in the world.

For those who knew Bisley, it had its’ own special atmosphere.

With plenty of parking and ease of access for exhibitors, public and less able bodied persons, the show venue offered everything an organizer or visitor could hope for. Food & drink was available in the form of breakfast, lunch and even a licensed bar.

After taking a full year to plan it, the 1st antique & classic event took place on 24th March 1996 and was hailed by the public who visited the fair as “a real arms fair” – an instant success (that took a year to make!)

The initial reaction has been constantly echoed over the years as more & more people discovered the event.

The Bisley Antique & Classic Arms Fair was, until its’ sad demise, a showcase for a complete range of items to suit every level of interest brought to Bisley by the UK’s top dealers.

UNFORTUNATELY, WE HAVE COME TO THE END OF THE BISLEY ANTIQUE AND CLASSIC ARMS FAIR

It is with great regret that we announce that our October show has been cancelled and there will be no future ones.

Although we had known that the lease on the Bisley Pavilion was to end in 2017 we had been told that our October date was safe and on that basis planned for it.

On Tuesday 12th April we had an urgent meeting with the CEO and Operations Manager of the NRA to discuss the future.

As a result of the meeting we have reluctantly decided that it would not be possible to continue with the Bisley Antique and Classic Arms Fairs in the same way as we have successfully for the last twenty one years.

All good things must come to a close, and we would rather leave now with, we hope, happy memories for our exhibitors and visitors. Thank you all for your support, and for making the Bisley Antiques and Classic Arms Fairs a unique experience.

With all our best wishes 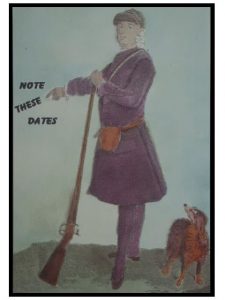 HE WAS A NOTED ECCENTRIC WHO, ON INHERITING A FORTUNE, SPENT IT ON HIS FAVORITE OCCUPATIONS OF SHOOTING & COLLECTING CURIOSITIES.

UNFORTUNATELY FOR HIM, HIS COLLECTION WAS BY THE STANDARDS OF THE TIME, JUNK, THOUGH IT IS POSSIBLE THAT NOW WE WOULD FIND VALUE IN IT, & HE WAS UNABLE TO FIND BUYERS WHEN HE TRIED TO LIQUIDATE IT.

EVENTUALLY HE WAS IMPRISONED FOR DEBT, DYING IN GAOL.

Just to let you know, this is a website is simply a tribute to those who worked on the original Bisley Classic Arms Fair – sadly now no more.

A small thank you to our supporters who helped us put up this website: